skip to main | skip to sidebar

I have a job, several of them actually. I have everything I need, and then some. I've learned to be gratefully content with very little. This has made far more difference in my life than an elected official ever could.

I'm still going to vote today, and I am grateful I can. I'm thankful for women like Alice Stokes Paul, who was a suffragist and an American hero. And as a woman, I'd like the government to stay out of my decisions regarding my body. When the Presidency, House and Congress were all controlled by the "pro-life" party, and they had the chance to make whatever pro-life law they wanted... the issue of abortion didn't even come up. Our values become abundantly clear when one looks at our historic acts of commission and omission.

There are other reasons I'll vote today.

Presidents Washington and Lincoln believed it was not enough to win a war, they had to win in a way consistent with the values of their society and the principles of their cause. They insisted that prisoners be treated with the same rights they were fighting for. It is shameful that recent administrations have embraced a doctrine of preemptive war, torture techniques including water boarding, extraordinary rendition, classifying prisoners-of-war as "enemy combatants", breaking the Geneva Convention, and the concentration camps in Guantanamo Bay, Cuba. I mourn the loss of over 162,000 civilians and combatants in Iraq and Afghanistan. I am sad that the historic peace churches were largely silent in the face of these moral atrocities. I am grateful that the current administration repudiated the Bybee Torture Memos in 2009. Let's choose leaders who can stand with Washington, and Lincoln, and Churchill, after all, they lived in equally perilous times.

Helping the poor has always been the Church's foremost responsibility. Sadly, the American church has been far more preoccupied with the prosperity doctrine than with ministries of compassion and mercy. Therefore, the government has been called upon to care for the least of these. However, when an administration faces the choice of feeding poor children or fighting wars to control the world's resources, the voice of the poor goes unheard. And if the church lacks compassion or mercy, from what source will a civilized society find it? And so we see the vilification of the poor, making it socially acceptable to ignore and abandon them, and this quickly becomes an issue of life and death. So how "Pro-life" are we when our people starve, and die from preventable diseases?

America is fast becoming a place where the gap between rich and poor is more remarkable than ever. Our politicians are beholden to special interests, neither Democrat nor Republican are above reproach. The wealthy, especially corporations, influence politics to protect their interests, while the poor have only their vote, and increasingly, that basic human right is denied them.

Increasingly, we create exactly the kind of country our ancestors fled. 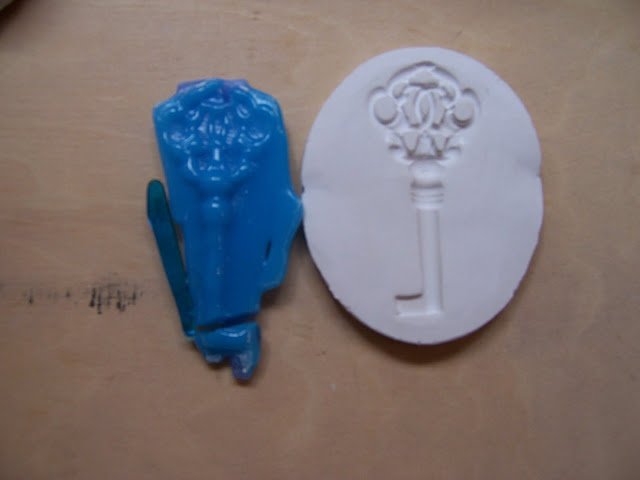 This was an experiment I tried in the kiln yesterday.  They were finally cool enough to take from the kiln this morning and this one was already broken before it came from the mold, but I think it's an interesting idea anyway.
Posted by Carmen Rose at 10:23 PM 2 comments:

Photos from the exhibit

This little clip gives the background for the art installation.
Photos from hanging the "Whole" exhibit and the display in the front window of the gallery.  The show runs through the end of June, drop by if you can.
Happy Creating,
Carmen Rose
Posted by Carmen Rose at 10:19 PM 1 comment:

This is the coolest thing!  My kickstarter.com project has just passed 50% funding and there are 25 hours to go!  A HUGE thank you going out to: 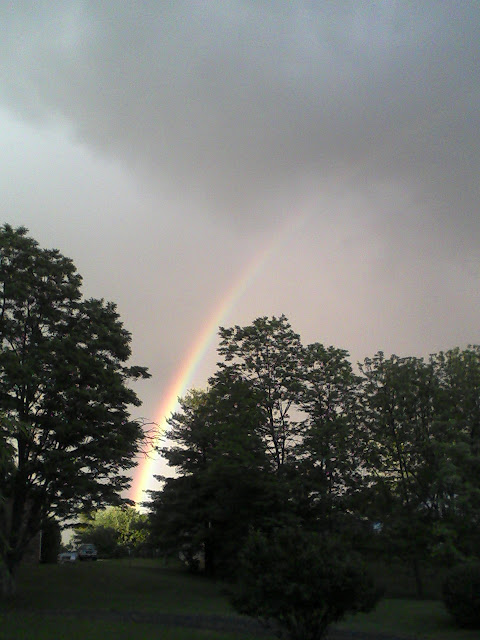 These dream makers have touched my heart by supporting this project and I have been SO touched by their generous hearts!
And look at this beautiful pair of rainbows from the storm on the 15th.
I sure had fun taking a break from my work to enjoy these!  I took LOTS of photos that evening! 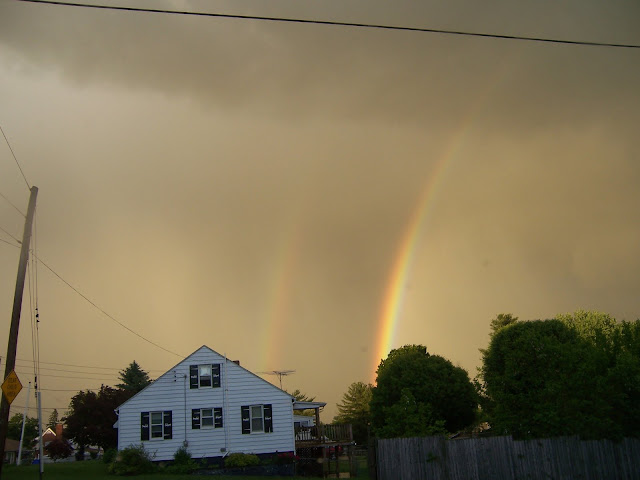 Have you seen my project yet?  Please surf on over and watch the video. 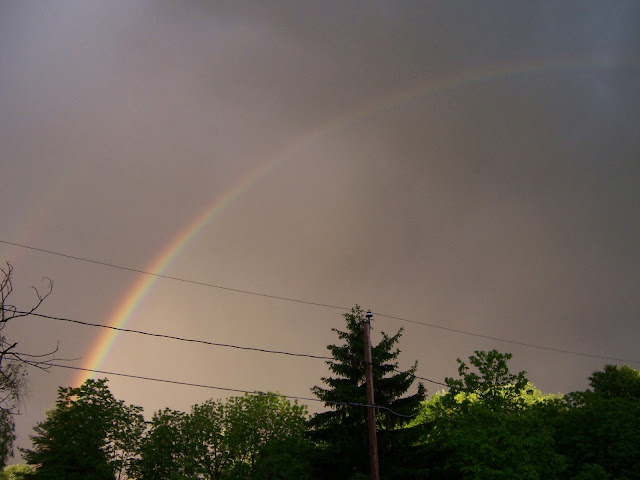 When I first saw it the rainbow was complete from side to side, then the second rainbow started to shine and the other end of it vanished.  Here's the last photo before it vanished altogether: 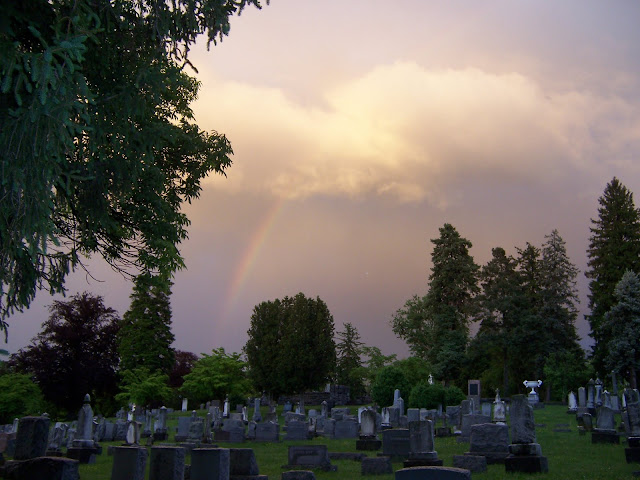 And thanks so much!!
Light and Beauty to each of you,
-Carmen Rose
Kickstarter.com Project entitled: "Whole, a broken heart, a vibrant hope."
Posted by Carmen Rose at 3:28 PM 1 comment:

A "WHOLE" big Thank You!

I'm so pleased to thank Steve Betz and Nikki Ross for being backers #11 and #12 for my kickstarter.com project.  Only 70 hours to go before the project ends.  Yeah, I'm feeling the suspense of whether or not the project will be funded!  LOL! 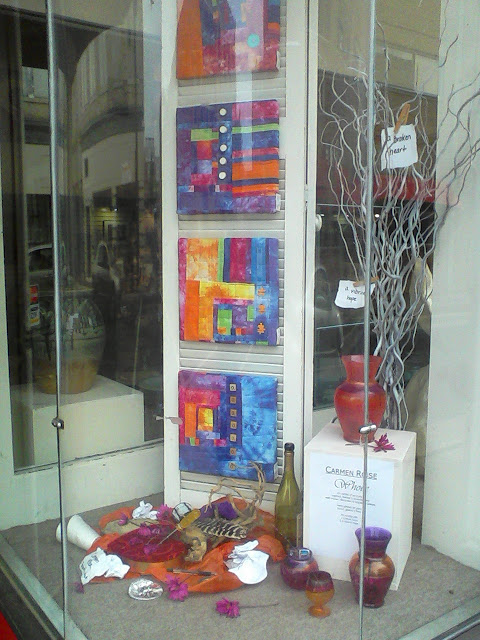 This display window for the show went up Saturday afternoon. Here are four of my 12x12 art quilts with some art glass.  The top one is "Buttoned" the second is "Set Aside."  The third is "In Pieces" and the forth is one of my personal favorites.  I titled it "Neglect."

It's really fun to have my work in the window, but since these works are so personally expressive it does make me feel a tad vulnerable. 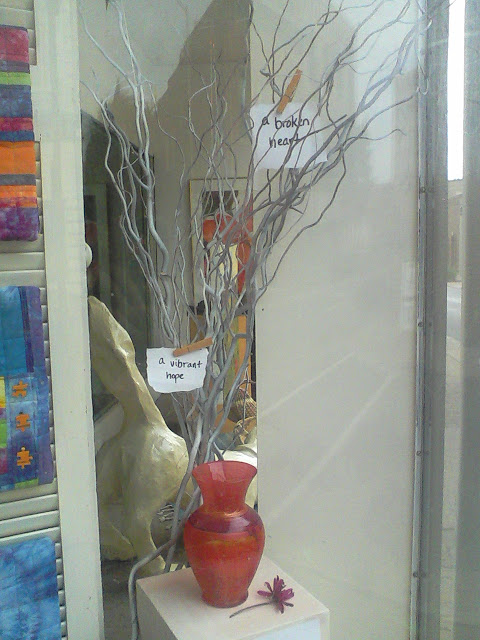 Cloths pins in the branches hold notes that read: "A broken heart" and "A vibrant hope."

Lower in the window the sign on the ped reads:


* * *
C A R M E N   R O S E
Whole
"An exhibit of art quilts, washed, framed and embelished.
Hand glazed art glass, found, glazed and fired.
An exhibit with a broken heart and a vibrant hope."
* * *
I hope this brings people in the gallery to have a closer look!
My Kickstarter.com project where this exhibit was born.
Still dreaming big dreams,
-Carmen Rose
Posted by Carmen Rose at 7:07 PM 1 comment:

I'm up to ten backers on my kickstarter.com project!  Only six more days to go to make this dream a reality!  Today I'd like to thank those who have backed the project so far:
you_will_succeed
Dawn Wampler
William Martin
Anthony Vilgiate
Xaver Wilhelmy
Sara Homeyer
Kim Scales
Melissa Chonka
Dawn
Wendi Dunlap
You all are my ANGELS! 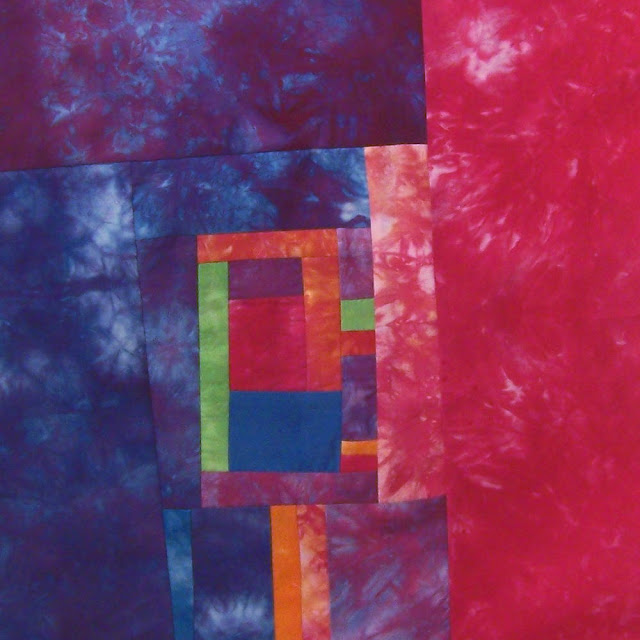 I'm working on quilting this one today.  I don't know what it will look like when I'm finished. 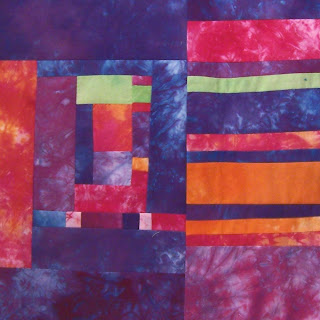 These two before I quilted them... 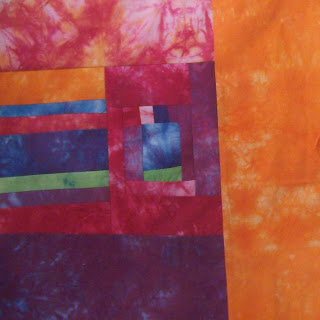 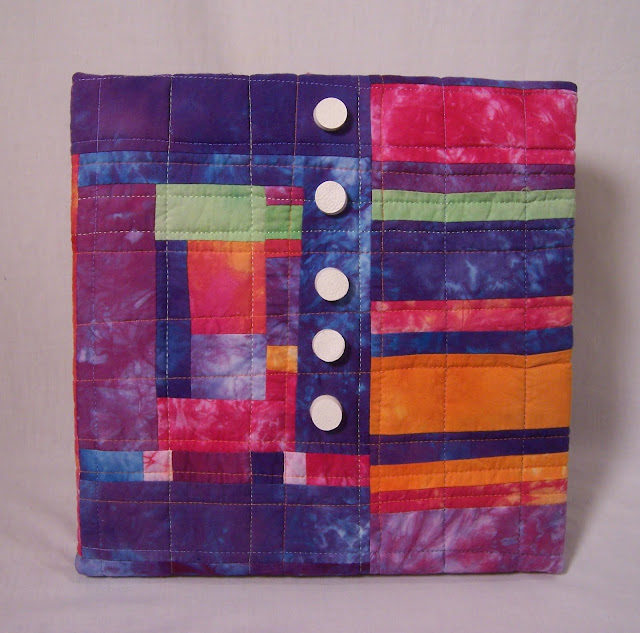 Buttoned.  It really makes a difference when I've finished the quilting... 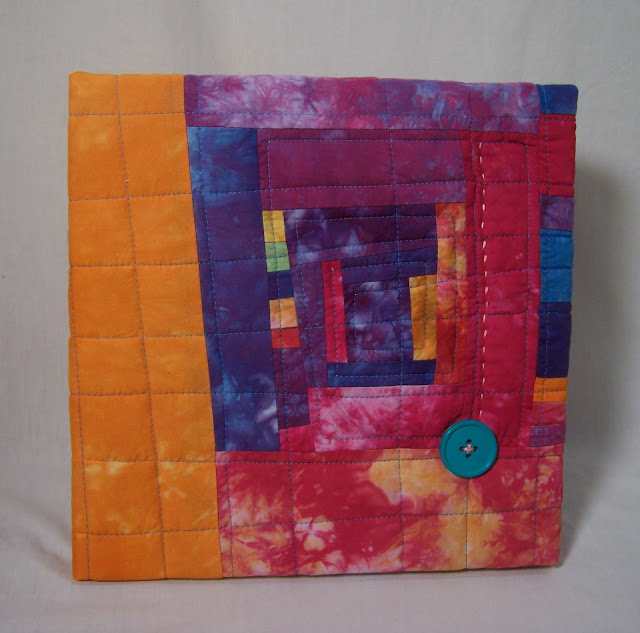 ...put them through the laundry and them framed and embellished them.
As you might imagine, sometimes it's tough just to choose which side is up!
I can't tell you how much I love what I do, and to have others partner with me
in the process is a genuine privilege and honor!
Thanks to those who have pledged to the project!
Would you like to get in on the fun?
My Kickstarter.com Project is here, go check out the video
that explains the whole thing and then choose what you'd like from the cool pledge options!
Thank you so much!
-Carmen Rose
Posted by Carmen Rose at 11:35 AM No comments:

Sock Monkey Give Away ~ Tell your friends!

Have you seen my Kickstarter.com project yet?  Only seven days left to pledge.
**You don't pay if the project isn't funded**
Please visit and check out my project!  Help me finish the exhibit the way I planned.  Thank You!!!
* * * * * * * * *
My little sock monkey needs a new home, so it's time to find the lil bugga a family. 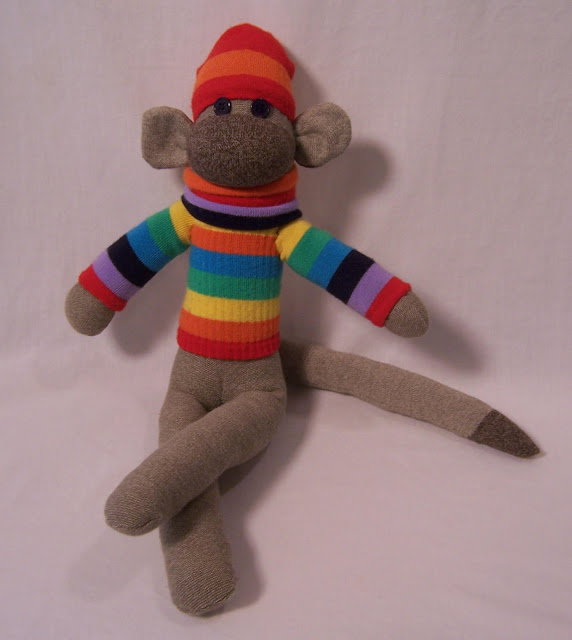 I made him ages ago from socks and haven't found the right place for him.
I'm thinkin you can help me with this though... 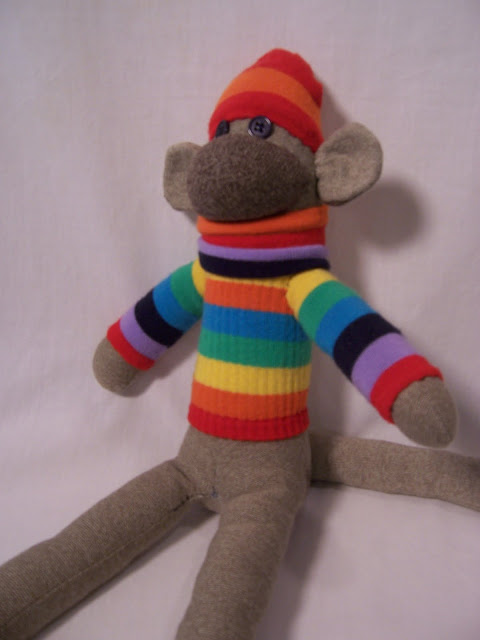 There are three ways to enter to win this adorable rainbow sock monkey.
1 - "like" my facebook page and comment on my sock monkey announcement.
2 - make a pledge on my kickstarter.com project.
(You pay nothing if the project isn't fully funded.)
3 - leave a comment on this post with an email address so I can contact you if you win.
Of course if you do all three your name goes in the hat three times!  YAY! 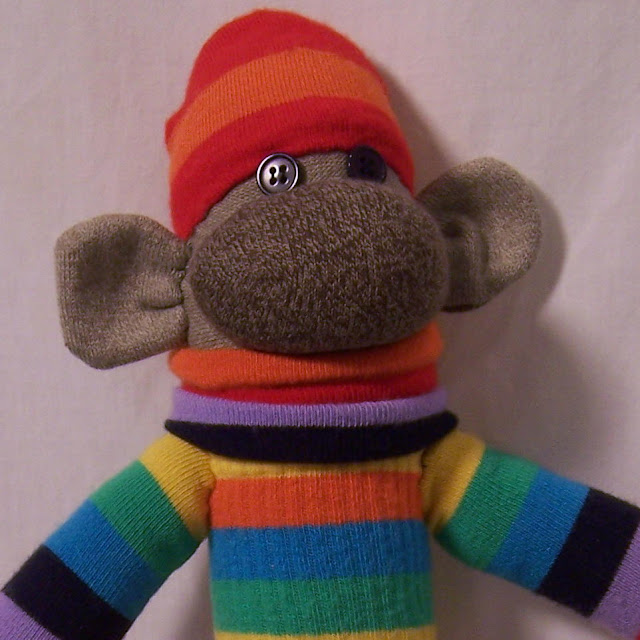 I will draw the winning name from a hat on Wednesday, May 18th at 6:00 pm.
I'll drop you a note and you can provide me with an address so I can mail out the sock monkey to you.
Please tell your friends!
Thanks,
Carmen Rose
Posted by Carmen Rose at 4:08 PM 2 comments:

my floral pearl necklace has been used in adverts for Fire Mt Gems on the back of trade magazines and in catalogs. 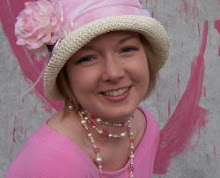 Something else I made

This Dragonfly Necklace was also used in Fire Mt ads and catalogs.